雅思 A 类小作文范文
Write a report for a university lecturer describing the information in the two graphs
below.
 You should write at least 150 words.
 Allow yourself 20 minutes for this task. 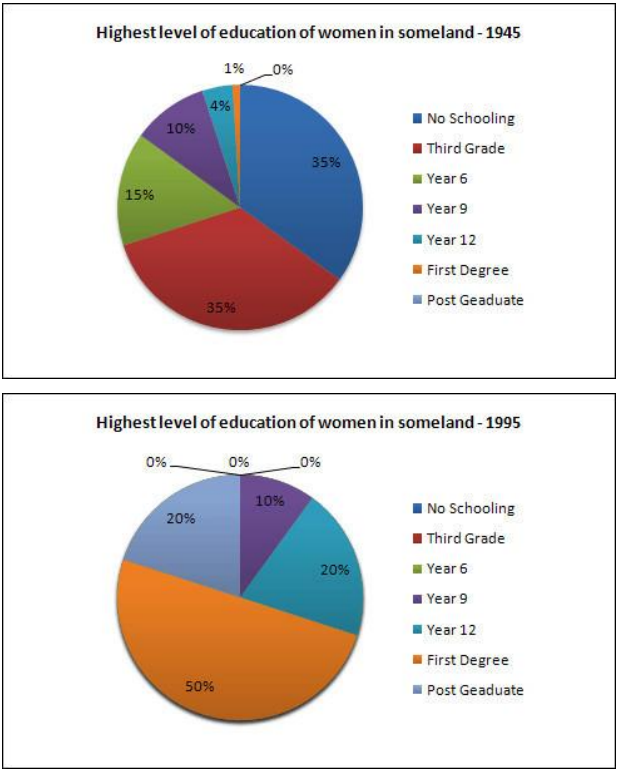 model answer:
The pie charts compare the highest level of education achieved by women in Someland
across two years, 1945 and 1995. It can be clearly seen that women received a much
higher level of education in Someland in 1995 than they did in 1945.
In 1945 only 30% of women completed their secondary education and 1% went on to a
first degree. No women had completed post-graduate studies. This situation had
changed radically by 1995. In 1995, 90% of women in Someland had completed secondary education and of those, half had graduated from an initial degree and 20%
had gone on to postgraduate studies. At the other end of the scale we can see that by
1995 all girls were completing lower secondary, although 10% ended their schooling at
this point. This is in stark contrast with 1945 when only 30% of girls completed primary
school, 35% had no schooling at all and 35% only completed the third grade.
In conclusion, we can see that in the 50 years from 1945 to 1995 there have been huge
positive developments to the education levels of women in Someland.